Thank you to Patrick Van de Wiele for this great review. (transcription below) http://www.keysandchords.com/album-review-blog/russ-hewitt-cielo-nocturno 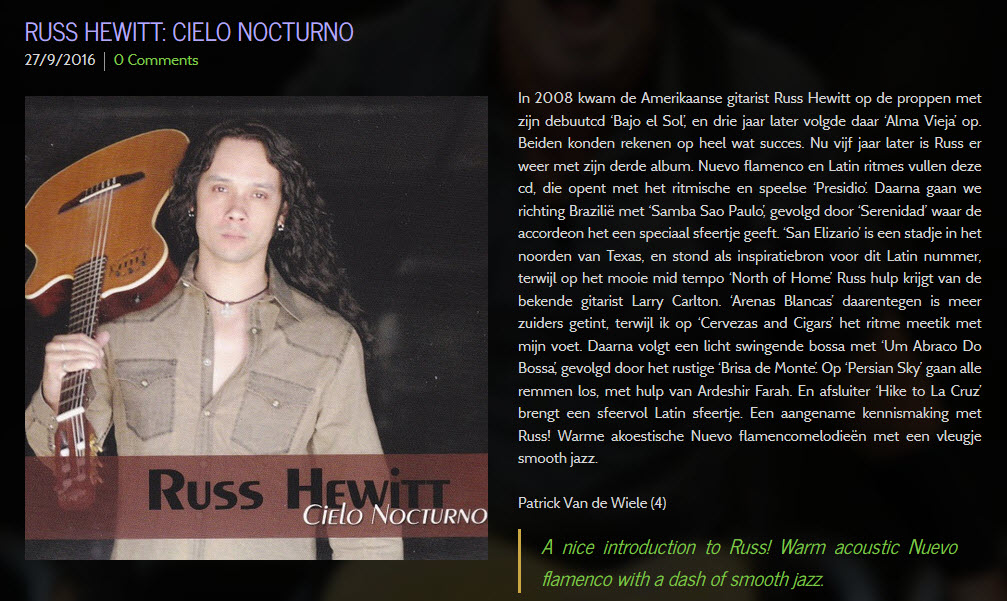 In 2008, the American guitarist Russ Hewitt came up with his debut CD ‘Bajo el Sol,’ and three years later followed by the album ‘Alma Vieja’. Both albums have become very successful. Now, five years later, Russ is back with his third album. This album contains Nuevo flamenco and Latin rhythms. It opens with the rhythmic and playful ‘Presidio’. Then we go to Brazil with ‘Samba Sao Paulo’ followed by ‘Serenidad’ where the accordion gives a special musical atmosphere. ‘San Elizario’ is a town in north Texas, and was a source of inspiration for another Latin song, while on the beautiful mid tempo song ‘North of Home’, Russ gets help from the renowned guitarist Larry Carlton. The song “Arenas Blancas” however, is more southern flavoured, whilst on ‘Cervezas and Cigars’ I automaticly tap my feet with the rhythm. Then, a light swinging bossa appears; ‘Um Abraco Do Bossa’, followed by the quiet ‘Brisa de Monte.’ On ‘Persian Sky’ all registers are going wide open, with the help of Ardeshir Farah. And the closing track ‘Hike to La Cruz’ brings again a nice Latin atmosphere. A pleasant encounter with Russ! Warm acoustic Nuevo flamenco melodies with a touch of smooth jazz.