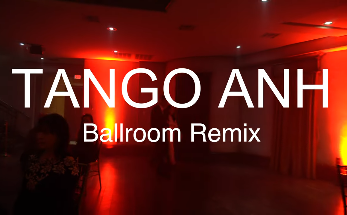 By russ hewittDecember 21, 2020News
No Comments

With the release of my new CD still on hold until next year, I wanted to release a remix single and video from a song off of my second CD. This song will not appear on the new CD, but as a one-off until new material makes it your way.

This is a deeply personal video as explained in the details below. I hope you enjoy it as much as I had making it! Along with YouTube, the song is available on all streaming and digital platforms.

STORY
After my dad’s passing in 2006, my mother took up ballroom dancing as a way to stay occupied and fit. As a surprise for her, when I began recording for my second CD I wrote “Tango for Anh.” After recently attending one of her dance classes, I got the idea of a remix in the style popular with the dancers. This time I called it “Tango Anh” (Ballroom Remix) and included this video.

VIDEO & CONCEPT
I found actors to portray my parents just as they were after they married. In fact, the closeup shot of the hand before the dancing begins is my father’s wedding band I was given after his passing. At the end of the video, there is a montage of my parents, including recent videos of my mother, which I was able to take without letting her know what they were for.

The dancers are renowned teachers and choreographers of Argentine tango, Hugo Patyn and Celina Rotundo from Buenos Aires, Argentina. With more than 20 years of global experience, they have been featured in numerous tango orchestras, seminars, concerts and videos.

The video was shot at the incredible Guitar Sanctuary in McKinney, Texas, by Joslin Dsouza.

STYLE
The remix is in a style called nuevo tango, a form of music that incorporates new elements into traditional tango music, oftentimes including the fusion of electronic and acoustic sounds. It also refers to the evolution of tango dance that began developing in the 80s. Some examples of neotango music artists are Astor Piazzolla, Tanghetto, Bajofondo, Federico Aubele, and Gotan Project.

SONG
I shortened the original song length by almost two minutes (apparently dancers don’t like five minute songs ha!). I replaced the original drums with a combination of electronic and real drums. The song also features guest accordionist Vladimir Kaliazine, whose unique style lends to the melody during his solo spotlight.

The song was recorded and remixed by Bob Parr at Savannah Recording in Denton,Texas.