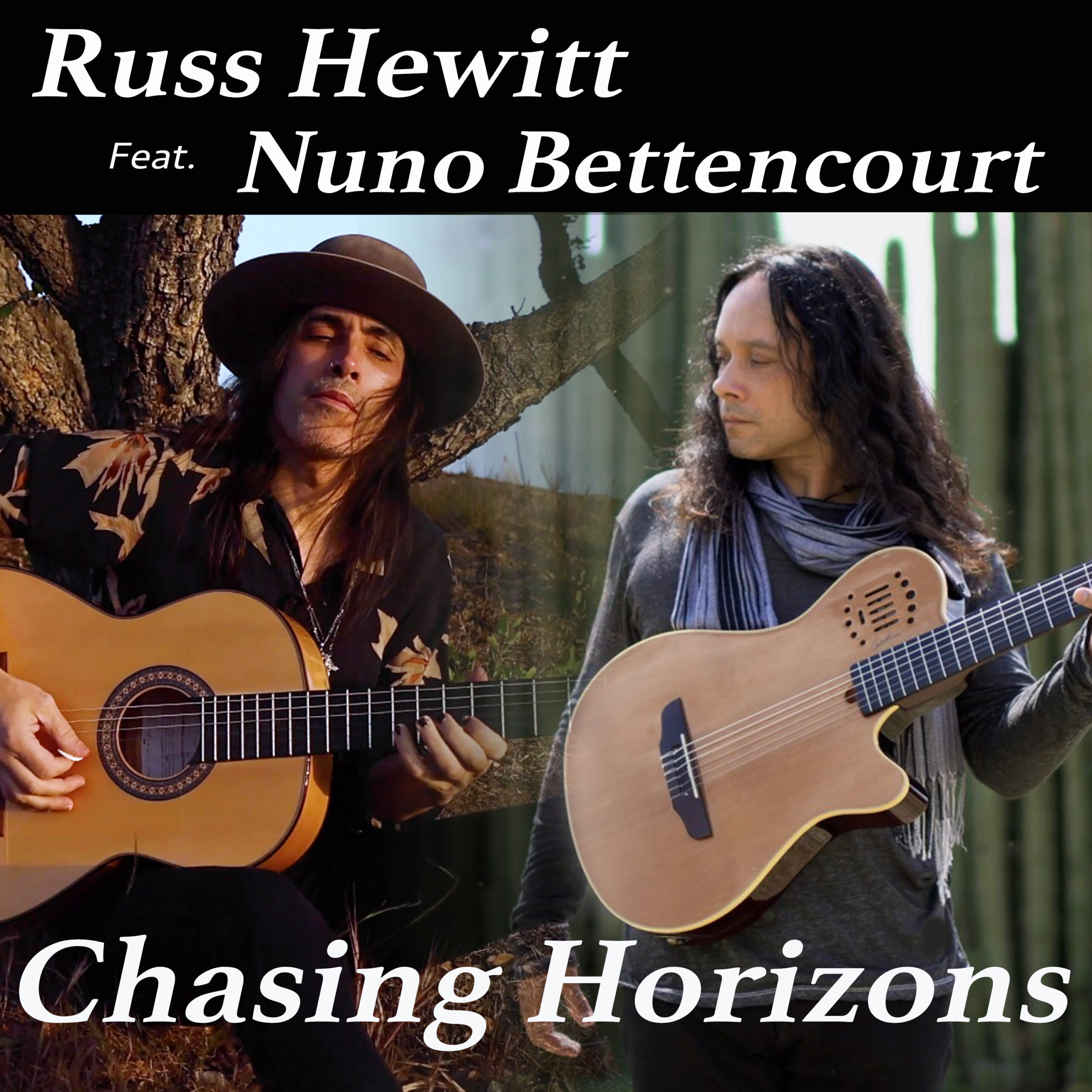 STORY
Initially I came up with the chorus chord progression. I liked the fingerstyle arpeggio motif I was doing but wasn’t sure what to do with it. I played it for my producer and he suggested I put it in a 7/8 time signature, from there the song fell into place very quickly. When we recorded the song, I thought the drums and bass were just killing it. Almost like a power trio kind of vibe where everything was locked in. When I was listening back to the song, I kept thinking of Nuno and how he would lock in with EXTREME on funk grooves. I felt this song would be rhythmically and harmonically interesting enough for Nuno to play on, so I reached out.
NUNO BETTENCOURT
Every time I’ve spoken with Nuno, our conversations always lead into Flamenco and Spanish guitar players. He’s a big fan of the style and quite knowledgeable. I knew at some point I would want to present him a song and felt this was the perfect one to do so. I had requested that he used a nylon string guitar on it, but said an acoustic would work too or an electric with no distortion. Nuno was very active in the final production of the song, suggesting that I add a quarter note ride or cowbell throughout the song and adding in the hand claps during the solo. His positivity and enthusiasm towards the song and my playing was really encouraging coming from someone of Nuno’s stature.
VIDEO
After watching Nuno’s video of his solo, I was inspired to do my video in a location that most people have never seen before. I found a small town in the middle of Mexico with a population of a couple of hundred people. It was filmed all in one location outside of the Iglesia De Jalpa. Surrounded by mountains, 30ft high cactus, an old Mission in ruins, and the Church of Jalpa, I couldn’t have asked for a better spot. A three hour drive from the nearest airport, I feel confident that no one has filmed a video here. Ha!
Recorded and produced by Bob Parr at Savannah Street Studios.
DRUMS – Walfredo Reyes Jr. (Official Fan Club of Walfredo Reyes Jr.)
(Santana, Steve Winwood, Chicago)
BASS/KEYBOARDS – Bob Parr
(Cher, Brian Setzer Orchestra, Barry White)
PERCUSSION – Raphael Padilla
(Miami Sound Machine, Shakira, Gloria Estefan)
PERCUSSION – Efren Guzman Mejia
(Alejandro Fernandez, Arnandi Mamzanero, Andrea Bocelli)
Video Edit – Joslin Dsouza
Video Filming – Joslin Dsouza, Sebastian Vallin
A special thank you to:
Mark Markel & Shari Markel at Analysis Plus Pro Audio (Black Oval) and QiJack (Stereo input jack); Vinni Smith at V-Picks Guitar Picks (Lite medium gauge); David Sestito at DLS Effects (RotoSIM); Nick Gutierrez at BBF Custom Pedalboards; Paul Shedden & James Lebihan at Mission Engineering, Inc.; Brian Neunaber at Neunaber Audio (Immerse pedal); Peter Janis & Jim Rhodes at Radial Engineering Ltd. (ToneBone PZ-Pre) and Primacoustic (Broadway Panel); Simon Godin, Fred Di Santo, Mario Biferali & Armando Vega at Godin Guitars (OFFICIAL) (Grand Concert Duet); Bill Wenzloff at Morley/Ebtech Aus Friends of Morley Official (Volume Pedal & HumX); John Clark at Voodoo Lab (Power Pedal 2 Plus); D’Addario and Co. (T2 strings); TC Electronic (Flashback); Electro-Harmonix (Black Finger);