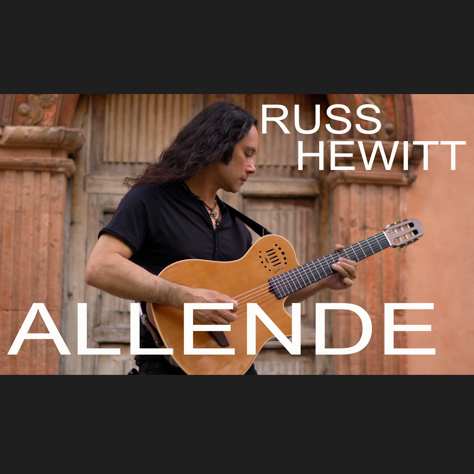 By russ hewittSeptember 12, 2022News
No Comments

New single and video ALLENDE out now. You can watch it on the video tab on my website, or directly on YouTube: Russ Hewitt – ALLENDE

Here’s a TEASER VIDEO, with the story below it.

VIDEO STORY
‘ALLENDE’ marks the second video out of three that was shot in the San Miguel de Allende area. Much like the video ‘Chasing Horizons’ featuring Nuno Bettencourt, the idea was to find locations that were lesser known or had never been used before.
In the ‘ALLENDE’ video I use two locations and blended them together. The first location was San Miguel de Viejo on the Rio Laja. This is a small chapel built near the site of the original settlement of San Miguel. Most scholars agree that it was built between 1720 and 1730 and features both indigenous and European styles of architecture.
The second location was the maguey fields in Lagunillas, Guanajuato. Though resembling a cactus, complete with thorny edges, the maguey is actually a member of the agave family – a cousin to the Tequila blue agave.
ENDING CREDITS
The scene starts with the pouring of Pulque de Tuna, which is Pulque mixed with red prickly pear. Pulque is an alcoholic beverage made from the fermented sap of the maguey plant. The drink was made from the fields I was playing in during the video. The drink’s history extends far back into the Mesoamerican period when it was considered sacred. My taste palate had never experienced that taste or texture before as you can probably tell by the expression on my face in the video. Definitely an unique experience that I would do again!
During one of our filming breaks, Joslin one of my videographers, walks up and does a couple of sweeping shots of the area. I hope from that and the drone shots you can get a sense of how majestic the location is.
The final shot is us walking through the maguey field where they can reach up to 20 feet in height.
Recorded and produced by Bob Parr Savannah Street Studios.
DRUMS – Walfredo Reyes Jr. (Official Fan Club of Walfredo Reyes Jr.)
(Santana, Steve Winwood, Chicago)
BASS/KEYBOARDS – Bob Parr
(Cher, Brian Setzer Orchestra, Barry White)
PERCUSSION – Raphael Padilla
(Miami Sound Machine, Shakira, Gloria Estefan)
PERCUSSION – Efren Guzman Mejia
(Alejandro Fernandez, Arnando Mamzanero, Andrea Bocelli)
Video Edit – Joslin Dsouza
A special thank you to:
Mark Markel & Shari Markel at Analysis Plus Pro Audio (Black Oval) and QiJack (Stereo input jack); Vinni Smith at V-Picks Guitar Picks (Lite medium gauge); David Sestito at DLS Effects (RotoSIM); Nick Gutierrez at BBF Custom Pedalboards; Paul Shedden & James Lebihan at Mission Engineering, Inc.; Brian Neunaber at Neunaber Audio (Immerse pedal); Peter Janis & Jim Rhodes at Radial Engineering Ltd. (ToneBone PZ-Pre) and Primacoustic (Broadway Panel); Simon Godin, Fred Di Santo, Mario Biferali & Armand Arnazzi at Godin Guitars (OFFICIAL) (Grand Concert Duet); Bill Wenzloff at Morley/Ebtech Aus (Volume Pedal & HumX); John Clark at Voodoo Lab (Power Pedal 2 Plus); D’Addario and Co. (T2 strings); TC Electronic (Flashback); Electro-Harmonix (Black Finger); Savarez (520 R)